From all four corners to the center of the state, to the major cities and all points in between, there are few regions of Pennsylvania where Carpatho-Rusyn immigrants did not find a home. 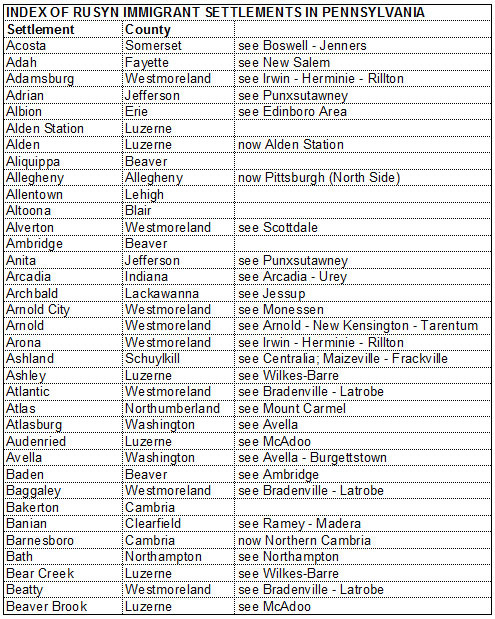 As mentioned previously, the book’s contents will include an appendix, “List of Settlements” (town, county) with cross-reference to the main entry. While it’s still a work in progress, the list of settlements numbers well over 600. See some examples here of how it looks.

This raises the question about terms that I’ve been using in this blog that I’d like to clarify. What do I consider a “settlement” and what is an “organized community?”

For purposes of this blog and the eventual book:

A settlement is a place (incorporated or otherwise) where Carpatho-Rusyn immigrants resided, regardless of their numbers. It is extremely unlikely, though possible, that only a single Rusyn immigrant or family lived in such a place, and it’s also somewhat unlikely that I would be able to learn of such a place where only one individual or one family was living. For the most part, the settlements are revealed in church records, where the place of a child’s birth or the place of residence of individuals being married or buried is noted. Generally, these locations are noted in some detail, down to the “patch” or village that may or may not be near the town where the church is. Some of these places—especially “patches”—no longer exist as inhabited places, and require reference to an old coal mine map or an excellent site like the Virtual Museum of Coal Mining in Western Pennsylvania.