Through the many years of doing what I've been doing, I've met numerous individuals along the way who have particularly affected me and my work. Two of those individuals recently departed this life.

John Schweich was known to many of the people I've been in touch with to do research, and not just in Pennsylvania. In fact, he was generally better known than I. For decades, John devoted much of his free time to collecting and assembling the largest collection in the world (no need to verify this; there is just no question!) of anniversary books published by American Byzantine Catholic and Orthodox churches of Carpatho-Rusyn, Ukrainian, and Russian background, which also includes books from Catholic and Orthodox parishes of other Slavic and Eastern European backgrounds.

He was not of Carpatho-Rusyn background; in fact, he had no Slavic or East European heritage at all. So whence this strong interest of his? In his own words:


I grew up in Frackville, a coal mining town in Northeastern Pennsylvania in the midst of some of the oldest Carpatho-Rusyn settlements (St. Clair, Minersville, Shenandoah, Mahanoy City) in North America. The local Rusyns had all of the fine qualities that are their trademarks, i.e. a fierce sense of loyalty to family and spirituality, a world class work ethic, a supreme ability to adapt to changing environments, that unparalleled cuisine, etc.

Ethnic self-awareness, however, was not one of them. Queries about their ethnicity produced responses like: "Slavonic," "Slavish," "Rooshin," "Greek," "Our People," "Austrian," "Hungarian," "Uhorsky," "Uhorshchane," "Rusnaks," "Ruthenian," "Carpo-Rus," "Carpatho-Russian," "Russian," "Buyzzantyne, (a pharmaceutical perhaps?)" etc. Never once did I hear the term "Rusyn." The people I queried about the terms "Greek" and "Byzantine," seemed to be more than clueless about the land of Homer or the history of Constantinople. The language used by those Carpatho-Russians was not Russian. Since I was studying Russian at Penn State at the time, it seemed closer to Ukrainian, although, strangely, the locals did not seem to appreciate hearing that.

To sort out the confusion and because Magocsi's works had not yet appeared, I consulted a few available books, which turned out to be the largely unhelpful works of polemicists. It began to occur to me there may be a "lost tribe" of Slavs that the mainstream scholars had failed or were otherwise unmoved to catalogue.

The solution seemed to be to collect all of the written histories available produced by a largely anonymous corps of parishioner chroniclers, which dealt not only with specific Byzantine Catholic and Orthodox parishes, but, ultimately, with the local Rusyn community itself.


Both of us Penn Staters and both of us longtime residents of the metropolitan D.C. area, we saw in each other "fellow travelers" who shared an appreciation for something known to few others, and not nearly as appreciated, that being these anniversary books and the history they encapsulated. We traded duplicate books and kept each other up to date on any new finds. And of course he graciously granted me access to photocopy or scan pages from the rarest items in his collection. 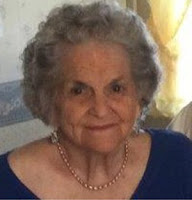 Justine "Jessie" Laychock went to her eternal rest on December 6. She was born in 1923 on top of the mountain overlooking Williamstown, Dauphin County, to George and Anna Suhar Molenich, Carpatho-Rusyn immigrants from Čertež and Ljachovci, Už County. She knew hard work, watching her father come home from the mines black with coal dust. Her mother did most everything else; raising the family, baking the daily bread and tending to the garden. She learned the importance of God, family and country from them, and this guided her throughout her life.

She was raised in the Holy Spirit Greek Catholic Church, Williamstown, where her father was the cantor. Three days after graduating high school in 1941, she left Williamstown with her best friend and $20 in her pocket, and went to Edison, N.J., to find employment. Jessie worked as a secretary for Bakelite during World War II and Roosevelt Hospital.

In 1951, Jessie married John Laychock, moving to Primrose, near Minersville, Schuylkill County, to raise a family. She would live there for the next 66 years. After raising a family, Jessie worked for Kings Department Store and Giant Food. She was a longtime member of St. Nicholas Ukrainian Greek Catholic Church, the home parish of her husband who was of Lemko Rusyn ancestry. Among her children is my friend Rich Laychock, a dedicated longtime national officer of the Carpatho-Rusyn Society.
(adapted from her obituary)

The oral history interview Justine granted me in May 2014 is exceptionally valuable because so little has been written about the Carpatho-Rusyn immigrant community in Williamstown. But through her willingness to talk to me about her childhood, her family, and her family's Rusyn friends and neighbors there, I trust the past life of that community will be illuminated for others to learn about.

Original material is © by the author, Richard D. Custer; all rights reserved.
Posted by Rich C at 12:04 AM No comments:

The 2017 Annual Convention of the Association for Slavic, East European, and Eurasian Studies (ASEEES) was held in Chicago, Ill., from November 9-12, 2017. The Carpatho-Rusyn Research Center sponsored a roundtable discussion, “Transgressing Identity: Choosing (Not) to Be Carpatho-Rusyn,” on Nov. 9.

When one of the scheduled panelists, Janet MacGaffey, was not able to attend, chairman Nick Kupensky (a faculty member at Bowdoin College) invited me to participate with him in the discussion of the aspects of the roundtable theme found in MacGaffey's book. Unfortunately I too was ultimately unable to attend the convention, but I prepared detailed historical and demographic information to accompany his portion of the roundtable discussion.

Other than Nick Kupensky, the roundtable participants were: 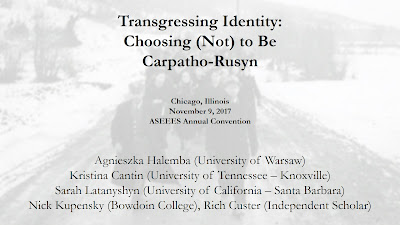 Kupensky posed this question to the panel, which is acutely relevant to my work chronicling the history of “the Carpatho-Rusyns of Pennsylvania:”


What is the role of the scholar when working on individuals or groups who (1) were but are no longer Rusyn, or (2) could potentially be Rusyn but have never identified as such?