A new website is the home of The Emil Kubek Project, "a scholarly resource dedicated to researching and publishing the history of the Slavic and Eastern European communities in Pennsylvania’s Coal Region. ...The project is named in honor of Father Emil Kubek (1857-1940), a resident of Mahanoy City, Pennsylvania, who was an amateur agronomist, accomplished lexicographer, beloved priest, and prolific writer of journalism, poetry, short stories, and the first Carpatho-Rusyn novel... As a prominent cultural and spiritual leader of the Carpatho-Rusyn community in Mahanoy City, Father Kubek exemplified the qualities of a humanist in every sense of the word. As such, the Emil Kubek Project embodies the spirit of its namesake by providing insight into the art, economics, history, literature, and religion of the Coal Region’s Slavic and Eastern European immigrant communities and their enduring legacy today."

The Kubek Project invites the public to join them on November 22, 2015 for the first ever West End Walking Tour of Mahanoy City: 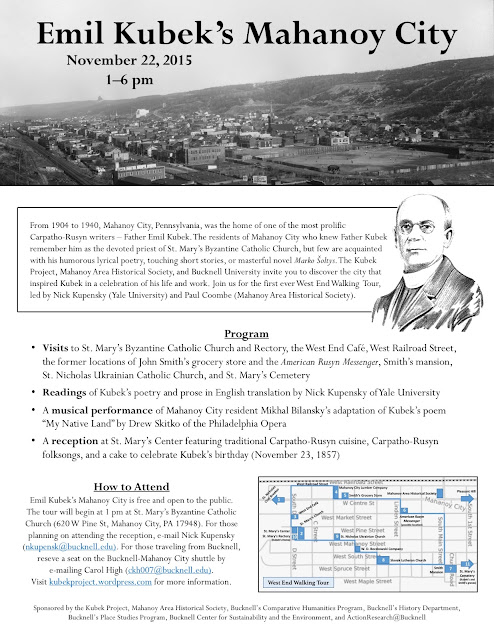 Original material is © by the author, Richard D. Custer; all rights reserved.
Posted by Rich C at 1:17 PM No comments:

On a seasonal theme... (Happy Halloween!)
Rusyn cemeteries provide some of the most lasting and informative evidence of the characteristics and personalities of a given Rusyn immigrant settlement. In Pennsylvania, the large majority of Rusyn churches have their own cemeteries. In urban areas like Philadelphia, Erie, and Johnstown, large Catholic or nonsectarian cemeteries serve alongside or instead of parish cemeteries as the final resting place of many Rusyn immigrants. And parish histories typically describe the establishment of a cemetery, or at least the year the land was purchased.

However, there is a third category of Rusyn cemetery whose history can be difficult to document. These are "independent" cemeteries founded by Rusyn immigrants and/or their children, usually in rural areas not directly served by a Rusyn church, but not exclusively so.

(this section updated 10/20/15)
I'm aware of at least 7 independent Rusyn (/Russian/Ukrainian) cemeteries that exist apart from any church, in Pennsylvania:
Also in Edwardsville (Luzerne Co.) and Catasauqua (Lehigh Co.), there were de facto Russian Orthodox parish cemeteries actually owned by fraternal lodges, not the parish, that were eventually sold to the local parish. When ownership was transferred, the name of the Edwardsville cemetery (located in Pringle) was actually changed -- from St. Nicholas (the name of the society that owned it) to St. John the Baptist (the name of the parish).

At 8 a.m. every Sunday, Mickey Kmietowicz of Glen Lyon unlocks the doors to St. Nicholas Ukrainian Catholic Church, nestled at the base of a mountain at the entrance of the Glen Lyon section of Newport Township.

Parishioners begin to trickle in and soon the pastor, the Rev. John Seniw, arrives following a drive from Berwick where he also serves as pastor of SS. Cyril and Methodius Ukrainian Catholic Church.

By 8:30, Kmietowicz has lighted the candles and some 45 parishioners celebrate the Divine Liturgy. A choir of four people sings a cappella. As per Ukrainian tradition, there is no organ.

Within minutes of the service ending, the collection is tallied in the church hall. The pastor meets briefly with a few parishioners. By 10, the church is closed and it will remain closed until the following Sunday, barring a church event or a funeral.

This is life in a small Eastern rite parish. These churches remain viable and even vibrant with diminished numbers because the faithful refuse to quit.

“The church has been our whole life. As we grew up, it was all based on that,” Kmietowicz said.