“Dido was a member of the Spolok”: Figuring Out Fraternals

Fraternal benefit societies, or more generally, fraternal organizations, were usually the first community institution established in the Rusyn immigrant settlements, in most cases preceding even a church. These were built on the model of similar organizations in the homeland and the United States, in part as a replacement for the American insurance that was not usually available to Slavic immigrants, and out of a need for an organization to rally the immigrants on an ethnic basis. (Some Carpatho-Rusyn immigrants joined existing American fraternals, especially the Woodmen of the World, whose distinctive tree stump-shaped headstones can be seen in various older Rusyn cemeteries in this country.)

The “brotherhoods” (later also sisterhoods) or burial societies would pay benefits to the surviving family members of miners killed or seriously injured in the all-too-frequent mine accidents. The first, the St. Nicholas Brotherhood, was founded in Shenandoah, Schuylkill County, in 1885. Within two years there were a total of seven, and they had come together as the Union of Rusyn Societies. However, that Union dissolved in 1889, and some of these brotherhoods affiliated themselves with the fraternal benefit societies that had already been established by Slovak immigrants, particularly the Roman Catholic “First Catholic Slovak Union,” popularly called “Jednota.” Recognizing the danger of assimilation posed by membership in Slovak Roman Catholic societies, a group of six Greek Catholic priests, all of Subcarpathian Rusyn origin from Hungary, along with fourteen Greek Catholic parish brotherhoods, met in Wilkes-Barre in February 1892 to establish the Union of Greek Catholic Russian Brotherhoods (Sojedynenije Greko-Kafolyčeskych Russkych Bratstv), later known simply as the Greek Catholic Union.

Having recently completed one of my periodic lengthy research trips, one that like most of them was many weeks in the making, I'd like to share some of the results and highlights.

I began the trip on a late May Saturday morning heading to central Pennsylvania, but having gotten a late start I skipped what was to be my first stop, the Broad Top Coal Miners Museum in Robertsdale, Huntingdon County, and went directly to Mount Union. There I was finally able to see and photograph the interior of Ss. Peter & Paul Russian Orthodox Church, founded in 1916 with the support of Tsar Nicholas of Russia, but evidently not with Carpatho-Rusyns among the founders. Father Christos Patitsas, the current pastor, was gracious in his welcome and explanation of the colorful yet troubled history of the parish in the last few decades and how it came to its current home as part of the Genuine Orthodox Church of America. [Here's an interesting video about the parish history.] The cornerstone is in both Russian and Romanian, and most of the parishioners seem to have been either Romanian, Ukrainian, or Macedonian. But Mount Union and this church have some interesting intersections with Rusyn history in Wood (aka Woodvale) and Ramey, so it's going in the book. Soon I hope to visit the miners museum in Robertsdale to see what they might have about Rusyn immigrants in that area, especially Wood and St. Michael's Orthodox Church there. (I do wish they had responded to my email inquiry about such things. I guess I'll just have to show up in person.)

I then hurried west to Boswell, Somerset County. I had just gotten word that Saints Peter & Paul Russian Orthodox Greek Catholic Church there would be having its final Divine Liturgy the next day and then would close. It was founded by Carpatho-Rusyns in 1913 and survived the death of the local mining industry and then a fire in 1998. Despite being able to restore the church interior after the fire, for years the parish hung on with only a handful of members, and the church building had deteriorated to a precarious condition. After the last registered member of the parish had passed away last year, and without any funds to repair and insure the structure, there was no choice but to close the church. 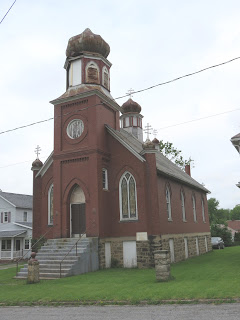 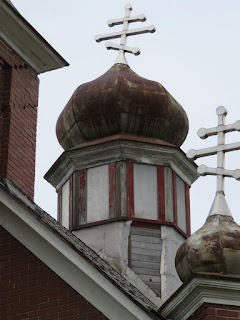