“The Carpatho-Rusyns of Pennsylvania”* will be published, in book form, as a comprehensive, illustrated history of all the Carpatho-Rusyn immigrant communities in the state.

The book will be an encyclopedia of sorts, dividing the state into regions, and within each region telling the story of each major community as a separate chapter or entry. (Smaller municipalities or settlements that had some organized community life or Rusyn presence will be covered within the entry of their closest affiliated primary settlement.)

Two central themes of every community entry will be “transplanting the village” and “who are we?” The first is to present the European homeland villages and village clusters from which the Rusyn immigrants came to that specific place in Pennsylvania. The second is to discuss the factors in each community’s history that led that community, or different segments of it, to identify with a particular ethnic identity/orientation or larger nationality as the case may be. And in most cases those two themes are completely interwoven. (There will be future posts here about these two themes.)

The book will be extensively illustrated, with maps, photographs, and other images. Most of the photos will be from the “immigrant era,” that is, basically before World War II. But a number of more-recent photos will be included to further illustrate key points in the life of the community, especially where ethnic culture and identity plays a part. 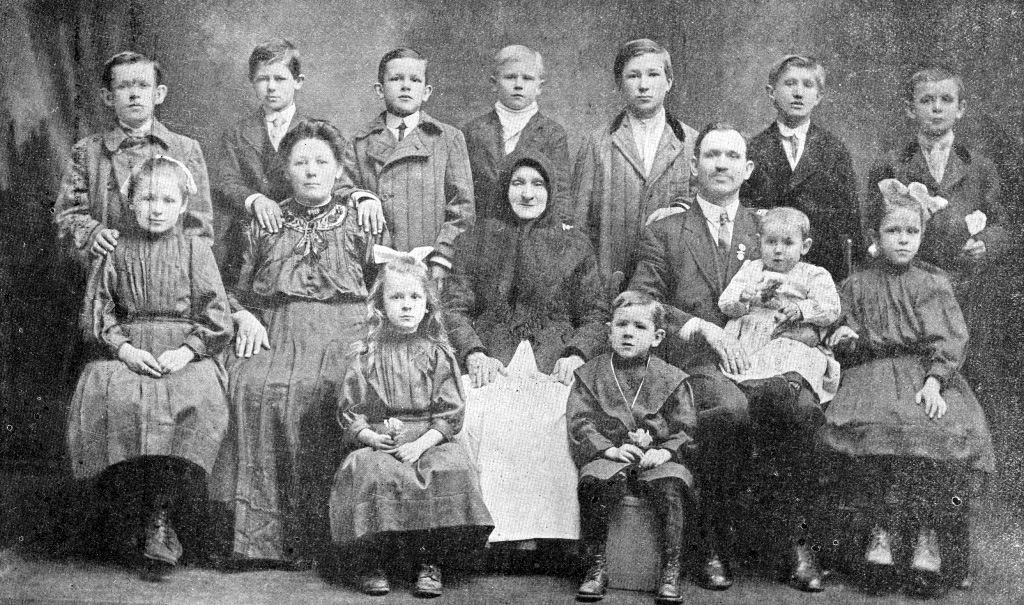 The book could equally serve the historian, the amateur genealogist, the student or follower of Eastern Christian history, architecture, and iconography, or the student or scholar of immigration history. It will serve equally well as a reference text and as a family heirloom. It will be a memorial to those Rusyn communities which no longer exist. Perhaps most importantly, it will serve as a sourcebook for Rusyn communities and parishes whose own historical resources may be limited or lost, giving them a foundation and pointing them in a direction where they can discover more of their own history. But ultimately, it will be a tribute to the Carpatho-Rusyn immigrants and their descendants who overcame tremendous adversity to build communities in which they could live and worship as they chose.

* I do plan to give the work a proper “book title,” something I’ve been pondering for many years. Until something truly fitting comes along, let’s call this the “working title.”

Though a third-generation Rusyn American (both my maternal grandparents were Rusyn immigrants), I knew fairly little about my heritage until high school, when I felt the need to learn about where my family came from and who and what they were ethnically. After discovering publications of the Greek Catholic Union and the Carpatho-Rusyn Research Center, and starting to attend a Byzantine Catholic church, my understanding of being Carpatho-Rusyn became clearer. I was fortunate to attend Penn State University in central Pennsylvania, which had an excellent collection of materials about Carpatho-Rusyn history and culture as well as those of other neighboring and related Slavic peoples. Realizing the close (though in many ways controversial) relationship between Rusyns and Ukrainians, I eagerly joined the Ukrainian Student Club at the university, where I met not only young Ukrainian Americans from Pennsylvania, but also a few Rusyn Americans who, like me, did not consider themselves to be Ukrainian but enjoyed participating in activities about a neighboring Slavic group that shares much with our own, including our Eastern Christian religion.

Penn State’s main campus is just a 30-40-minute drive from several late-19th/early-20th century Rusyn immigrant settlements (Philipsburg, Hawk Run, Osceola Mills, Madera, Ramey, and Clarence) that each had a Byzantine Catholic or Orthodox church of one jurisdiction or another (Ruthenian Byzantine Catholic, Ukrainian Byzantine Catholic, Orthodox Church in America, Carpatho-Russian Orthodox). Whether independently, as part of the Ukrainian Student Club, or as part of the revived Byzantine Catholic Student Ministry I also became active with, I occasionally traveled on Sunday mornings for liturgical services at these churches. I also began to photograph the churches and collect anniversary commemorative booklets in order to read the history of the parishes. It became evident how interrelated these different parishes were, even if the published histories did not go into detail on that point.

I began to travel in other parts of Pennsylvania in my free time, particularly in the summer, first to Schuylkill County, which was the closest cluster of Rusyn communities to my home in Hershey, to visit and photograph other Byzantine Catholic and Orthodox churches of Carpatho-Rusyn origin.

Eventually I had photographed a significant number of the churches, so I put them into an album with short captions about the church’s name, location, jurisdiction, founding date, and any other tidbits. Around 1988, having become acquainted with Carpatho-Rusyn cultural activists in the Pittsburgh area, I began to attend the annual Pittsburgh Folk Festival on Memorial Day weekend, displaying the photo album (eventually two full albums) as part of the Carpatho-Rusyn cultural display.

These albums attracted noticeable interest and generated much valuable discussion that revealed the most fascinating aspects of parish history that oftentimes have never been written or addressed in a serious way. In addition, it was clear that despite the divisions across related parishes into Greek Catholic/Orthodox, or Russian/Carpatho-Russian/Ruthenian/Ukrainian, some visitors still had an awareness of a common ethnic origin of these communities. In the course of the discussions, some visitors even showed some familiarity with patterns of chain migration from a single village to several different Pennsylvania locales. I was inspired to try to make these linkages clearer and formally document them. And I began to seriously consider publishing these photos and facts of interest as a book.

In 1992 I moved to Pittsburgh and entered graduate school, in one of the two areas of Pennsylvania with the largest concentration of Rusyn immigrant settlements and Rusyn immigrant-founded churches. Over the next few years, I continued the photography but began to dig deeper. I visited parish cemeteries and discovered gravestones in one Slavic language or another stating the deceased person’s birthplace or fraternal lodge affiliation. I found published oral histories of Rusyn Americans of various religious and ethnonational orientations who colorfully related some of the same stories I had informally heard at the Pittsburgh Folk Festival or when I visited the churches. I found the rich collections of otherwise-lost-to-history photographs published in fraternal organization almanacs. I realized that what I had started to build was only part of the story, that the history of a parish is an important, but only one, aspect of the larger local Rusyn community’s history. 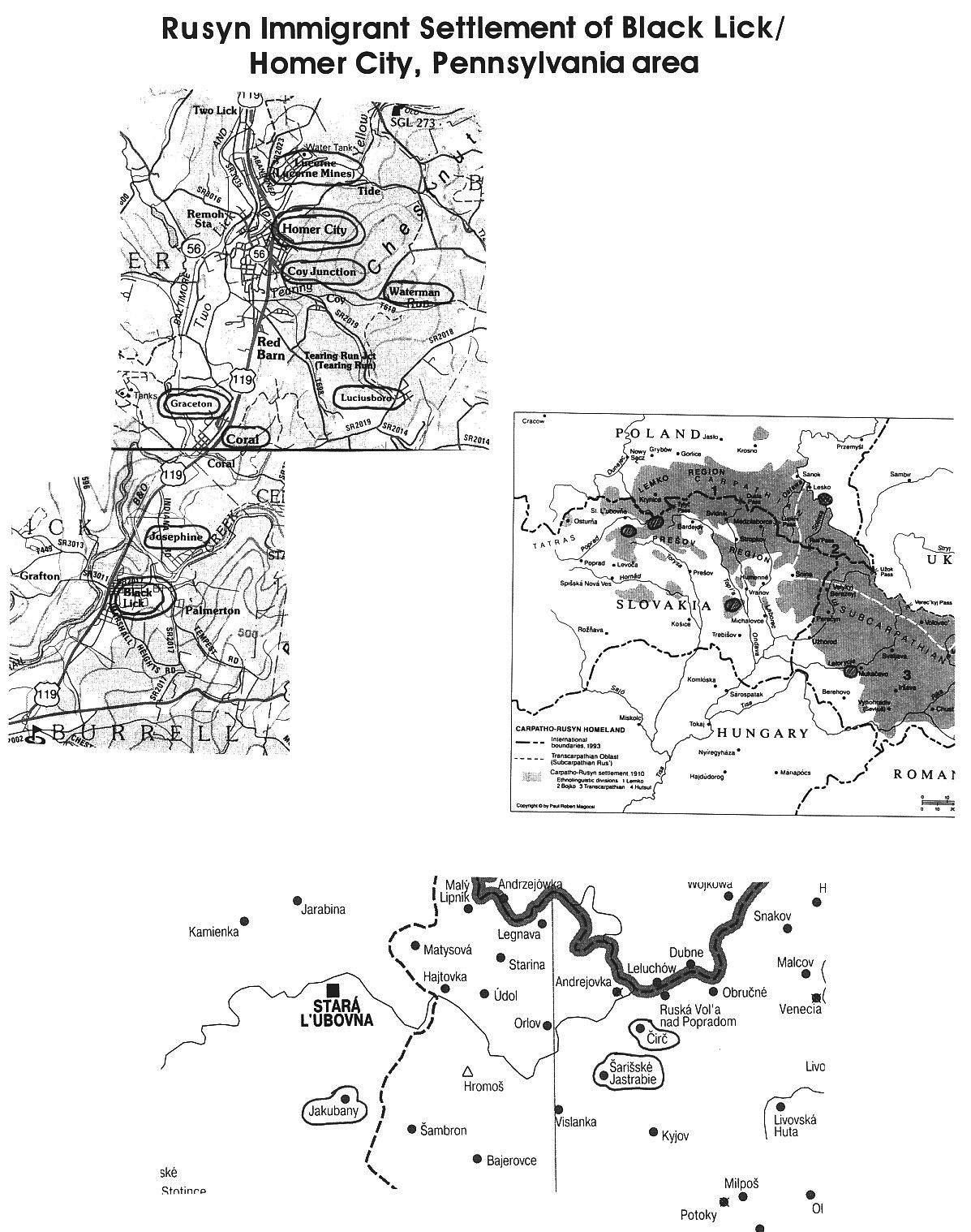 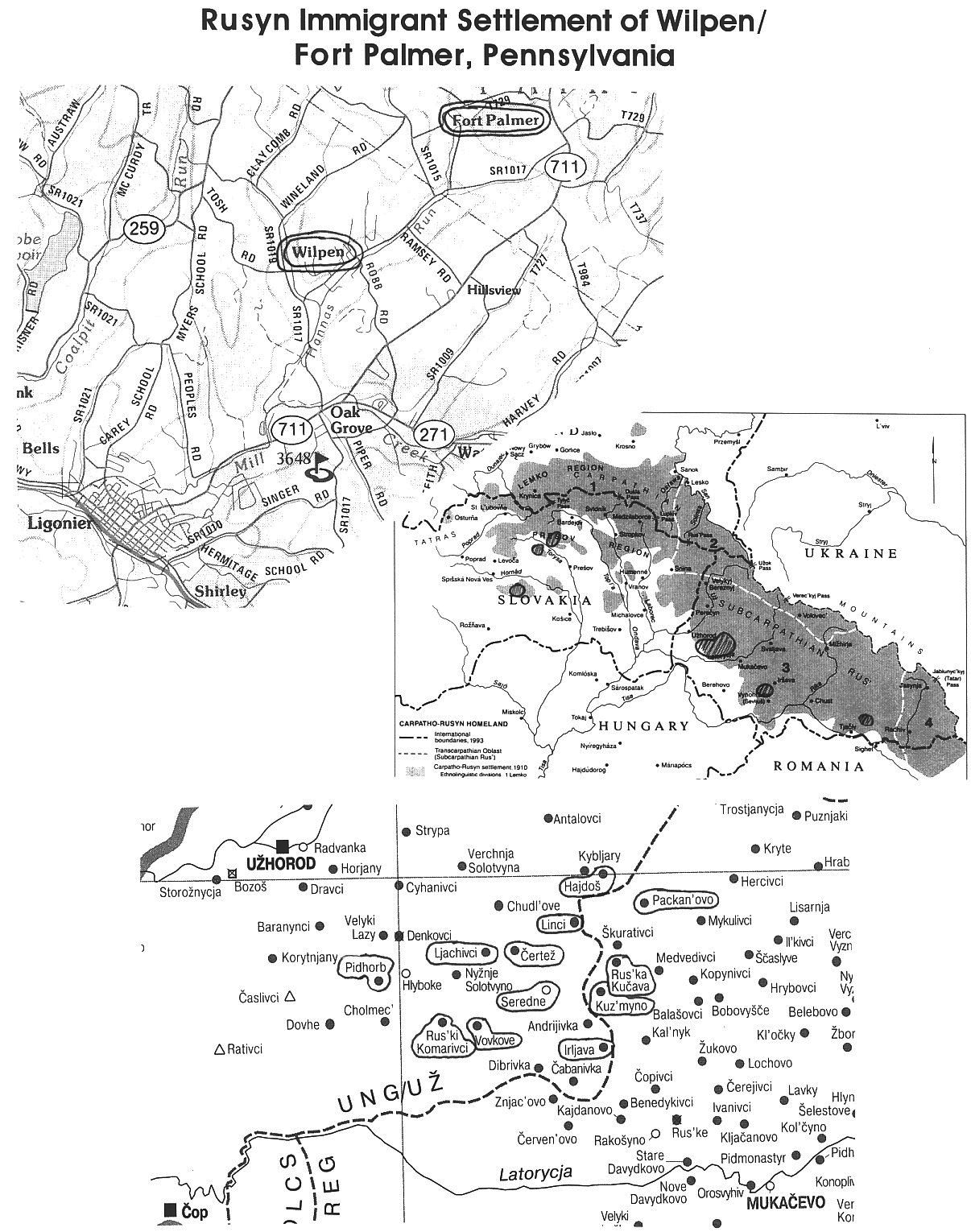 It was especially when I widened my study to chain migration patterns that it began to seem like I could produce a truly ground-breaking publication in the history of Carpatho-Rusyns. The knowledge of these patterns made it possible for me to document what had been mostly in the realm of informal knowledge on the part of family historians. I produced posters for use at ethnic festivals showing various Carpatho-Rusyn churches in the region and plotted on a map the villages that its immigrant founders came from, displaying them in Pittsburgh and elsewhere. The continued interest in this information by festival patrons led me to a number of speaking engagements at genealogy conferences where I told the story of the local Rusyn immigration, their arrival and villages of origin, and the development of their communities and churches. The tremendous positive feedback inspired me to continue researching at a deeper and deeper level.

Early on, I met several key individuals who not only encouraged me in this work but without whose support I might have abandoned the effort. One I will mention by name is Bishop Michael J. Dudick, of blessed memory, whose generosity of materials, time, and hospitality I will not forget.

And so over the course of two decades and counting, my research has taken me across Pennsylvania, to small towns and hidden cemeteries, to homes, courthouses and libraries, and to archives as far away as Long Island, N.Y., Connecticut, Minnesota, and Canada to truly uncover the full story of Carpatho-Rusyn immigrants in Pennsylvania.

I have photographed almost every church (some now destroyed or decommissioned) and parish cemetery and old immigrant gravestone, collected parish histories and articles from local and immigrant newspapers, investigated fraternal organization records and parish metrical records to discern the European villages of origin of the immigrant founders/settlers in each place in Pennsylvania, and collected or scanned photographs showing the life of the community, mainly from before World War II, but also some more current photos. Many individuals have lent their voices and memories through oral history interviews to provide a direct experience of the history, and I have collected virtually every memoir written and published by Rusyn immigrants and others about the earliest days of Rusyns in America.

I now have more material than I can possibly publish in one book, so the challenge remains for me to distill the essential and most interesting information while still presenting in rich detail the Carpatho-Rusyn experience in Pennsylvania.