From the Carpathians to the Alleghenies: Carpatho-Rusyn Immigrants in the Greater Johnstown Area (2)

The presentation continues with a look at the Rusyn communities in northern Cambria County and eastern Indiana County.

[Arrived here first? Jump back to the beginning of the presentation]
Barnesboro/Spangler (now Northern Cambria)
Rusyns settled northern Cambria County to work in the local coal mines in the early 1890s. Their first organization was the St. Nicholas Greek Catholic Lodge of Hastings, which had members from Barnesboro and Spangler, and joined the Greek Catholic Union in 1894. (Barnesboro and Spangler each had a GCU lodge in 1901.) After 1895 they were visited occasionally by priests from Johnstown, or traveled to Johnstown, for the sacraments. In 1897 they established a church in Barnesboro, St. John the Baptist. This church served Rusyns in the Barnesboro/Spangler area (including Carrolltown, Bakerton/Elmora, Hastings, Cymbria, Cymbria Mines, Emeigh, Emeigh Run, Mosscreek/Marsteller, Heilwood, Alverda, Colver, and St. Benedict) as well as Patton, Clymer, Dixonville, Arcadia, Glen Campbell, and Urey.

The influential position of the Greek Catholic Union in St. John's parish led to a dispute with the pastor, Father Viktor Kovaliczky, in 1910, over his support for the Galician Ukrainian Greek Catholic Bishop Soter Ortyns'kyj. The GCU mounted a nationwide campaign to oppose and recall Bishop Ortyns'kyj. The opposition in St. John's parish and revolt against the pastor became so rancorous that Bishop Ortyns'kyj imposed an interdict on the parish, effectively closing the church. Father Kovaliczky and his supporters organized a new parish, St. Mary's Immaculate Conception, in 1913 in Spangler on a hill looking directly toward St. John the Baptist Church. Thereafter the interdict on St. John's parish was lifted, but the separation was irrevocable. 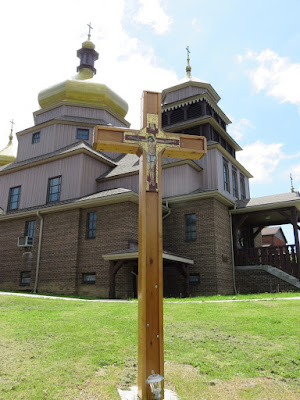 Wehrum & Vintondale
Rusyn immigrants were already living in Vintondale, at the western edge of Cambria County in 1896; the largest number were from Velyki Lučkŷ, Bereg County; the next largest group was from the Maramoroš County villages of Čumal’ovo, Uglja, Drahovo, and Selyšče. Several individuals also came from Paryzivci, Zemplyn County, and Hinkivci, Šaryš County. Just to the west across the Cambria-Indiana County border, the town of Wehrum and its mines were established in 1901.

While these early Rusyn settlers were communicants of St. Mary's Greek Catholic Church in Johnstown after its 1895 founding, most of the local Rusyn immigrants then founded Holy Trinity Russian Orthodox Church in Wehrum around 1902, the first such Orthodox parish in the region. Just four years later, the mines in Wehrum had nearly shut down. Most of the miners, including the immigrant Rusyns, moved to nearby Vintondale. There they built a new Orthodox church in 1907. 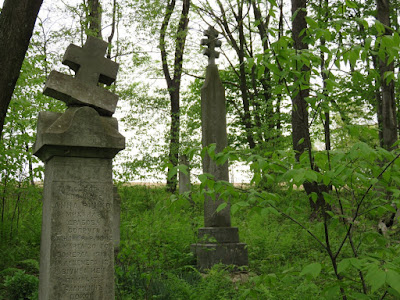 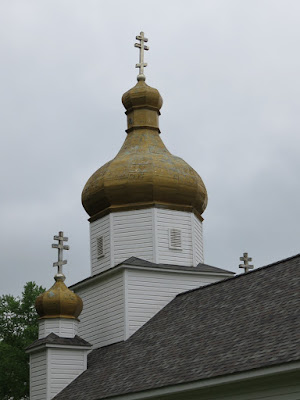 The first Rusyn fraternal lodge in this area was Lodge 250 of the GCU, the Brotherhood of St. Michael, founded ca. 1904. With the bulk of the local Rusyn population joining the Russian Orthodox Church between 1902-1907, new brotherhoods of the ROCMAS fraternal organization were founded in Wehrum (Lodge 64, St. Nicholas, 1905) and Vintondale (Lodge 85, Ss. Peter and Paul, ca. 1908).

Relative peace in the congregation was disturbed when two rival parish cantors led factions against each other for control of the parish and the right to appoint or dismiss the parish priest; a lawsuit was filed by one faction against the other. At this time, Russellite (Jehovah's Witness) missionaries began to visit Vintondale, probably inspired by success they had had in the Monongahela River Valley among Rusyn immigrants from Velyki Lučkŷ, Bereg County. The large number of Velyki Lučkŷ natives in Vintondale resulted in some success in conversions to Russellism. Today it is said that the members of the Kingdom Hall of Jehovah’s Witnesses in nearby Mundy’s Corner are mainly the descendants of these Rusyn converts. Eventually, peace was restored to the Ss. Peter & Paul parish and today, while small in membership, the church remains open and has weekly services.

Nanty Glo
The Nanty Glo area was settled by Rusyn immigrants around 1897, including the villages of Twin Rocks, Expedit, and Cardiff, to work in the local coal mines. While some traveled to Wehrum and Vintondale’s Orthodox churches for their spiritual needs, most remained Greek Catholic and traveled to Johnstown or later to South Fork’s St. Michael’s Church (founded 1905). Some of them organized a branch of the GCU in 1909, Lodge 401, Dormition of the Mother of God.  In 1919 the Nanty Glo-area Rusyns established their own parish, St. Nicholas Greek Catholic Church. The local Rusyn community was made up of people mainly from these villages: Čirč and Vŷšnij Verlych, Šaryš County; Moravany, Zemplyn County; Velyki Lučkŷ, Bereg County; Drahovo, Maramoroš County; and Kryve, Bereznycja, Bereska, Rajske, and Serednje Selo, Lisko County.
Clymer & Dixonville
Carpatho-Rusyn immigrants settled the towns of Clymer, Dixonville, and the neighboring coal patches like Starford, Commodore, Idamar, and Possum Glory/Heilwood in the 1st decade of the 1900s. Most of them lived in Clymer and Dixonville; these two groups cooperated in organizing a Greek Catholic parish. They agreed to locate the church in Clymer, while establishing a cemetery in Dixonville. St. Michael's parish in Clymer was established in 1907, and a one-story foundation was constructed to serve as the church, with the Dixonville Rusyns as integral members. This situation lasted for about 8 years. Fraternal organization lodges also began around this time: St. Michael Brotherhood (RBO Lodge 102 of Dixonville, ca. 1907) St. Michael Brotherhood (GCU Lodge 414 of Clymer, ca. 1909), Ss. Peter and Paul Brotherhood (GCU Lodge 458 of Dixonville, ca. 1909).
The bulk of the Clymer-area Rusyns were from villages in Subcarpathia, especially Šaryš County (Bajerivci, Potokŷ, Hrabivčik, Vyslava, Vŷšnja & Nyžnja Pysana), Vŷšnja & Nyžnja Ol'šava, Zemplyn County, and Bobovyšči, Bereg County.

The Rusyn immigrants in Heilwood founded a GCU lodge (Ss. Peter and Paul Brotherhood) in 1905, and were affiliated with St. John the Baptist Church in Barnesboro as well as St. Michael's Church in Clymer and later the St. Mary's Russian Orthodox Church in Dixonville. Some of them, along with a small number of Rusyns in nearby Alverda founded a church in Heilwood in the 1920s, initially Greek Catholic, later Orthodox under the Russian Metropolia and the Carpatho-Russian Diocese. The Heilwood settlers came mostly from Krajnja Porubka, Hinkivci, Prykra, Medvedže, Korejivci, and Krajnja Bŷstra, Šaryš County. 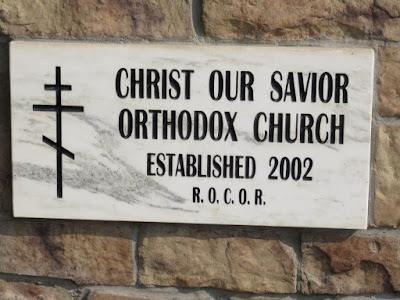 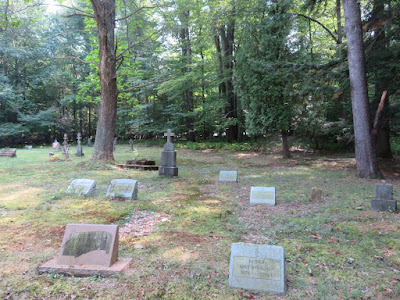 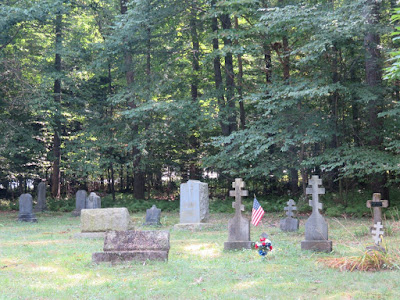 Although the rule of Greek Catholic Bishop Stephen Soter Ortyns'kyj coincided with (or ignited) a movement of Carpatho-Rusyn immigrants to the Russian Orthodox Church, the closest Russian Orthodox parishes were in Black Lick (Indiana Co.) and Patton, discussed above. While Arcadia was not close enough to either to be directly influenced, some Rusyns in the Arcadia area founded a local lodge of the Russian Orthodox Catholic Mutual Aid Society (ROCMAS) around 1910. Then with the arrival in the area in 1913 of a Russian Orthodox priest of Rusyn background, perhaps related to the interdict that closed the mother church in Barnesboro, the "return to Orthodoxy" movement among Rusyns in the U.S. came to this part of rural Indiana County. For several years Holy Ascension parish was served by an Orthodox priest, but legal proceedings turned the parish back over to Greek Catholic control. In 1916 some of the members of the Arcadia church established a new Orthodox parish, Saints Peter & Paul, closer to where most of the pro-Orthodox faction lived, in the village of Urey. 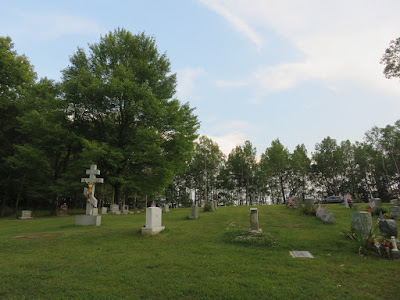 Bakerton (Elmora)
A small mining village just west of Carrolltown and southwest of Barnesboro is Bakerton, also known as Elmora. The Rusyn immigrants here primarily came from villages in Lisko County (Zatvarnycja, Chmil, Tvoryl'ne, Rajske, Kryve, Solyna, Rybne, Dvernyk, Protisne) with a few families from Subcarpathia, first arriving around 1902. They would travel to St. John the Baptist Church in Barnesboro for their spiritual needs.

In 1913, these Rusyn immigrants founded the Greek Catholic Church of St. Josaphat in Bakerton. Its pastor was shared with the majority-Galician St. Mary's Greek Catholic Church in Spangler. However, in 1922 it switched affiliation to the Ukrainian Orthodox Church and was renamed Ss. Peter & Paul Church.

After initially being affiliated with the Rusyn churches in Barnesboro, in 1916 Colver's (and some of Revloc's) Rusyns established an Orthodox parish, Holy Ascension.

(Do you have any historical photos of this community? If so, please get in touch.)