While Governor John Kasich has been involved in Ohio state politics since 1983, he was born and raised in Pennsylvania.

He also describes himself as


the son of a postal worker and the grandson of a coal miner. His grandfather was so poor, Mr. Kasich recently told voters in New Hampshire, that he would bring home scraps of his lunch to share with his children. “They would even be able to taste the coal mine in that lunch,” Mr. Kasich said. “Some of you can relate to that.”
("John Kasich Balances His Blue-Collar Roots and Ties to Wall Street," New York Times, Aug. 24, 2015)

Wikipedia currently describes his background and ancestry as follows:


Kasich was born in McKees Rocks, Pennsylvania, an industrial town near Pittsburgh. He is the son of Anne (Vukovich) and John Kasich, who worked as a mail carrier. Kasich's father was of Czech descent, while his mother was of Croatian ancestry. Both his father and mother were children of immigrants and were practicing Roman Catholics. He has described himself as "a Croatian and a Czech". ("John Kasich," Wikipedia, accessed March 8, 2016)

We know that Czech immigrants in Pennsylvania were few and far between. Is Gov. Kasich really, as he has said, of Czech ancestry?

His parents, who both died in August 1987 as a result of an automobile accident, are buried at Mount Calvary Cemetery in McKees Rocks:

Info from the findagrave memorial for John Kasich:

Info from the findagrave memorial for Anne B. Vukovich Kasich:


As the governor has stated, he has Croatian heritage, and his mother's maiden name Vukovich seems to be Croatian enough.

But what of the Kasich side?

The following document gives the birth date and place of John Kasich (the governor's father): born April 20, 1919, in Smithdale, Allegheny County, Pa., and living in Lowber, Westmoreland County, Pa., at the time of his entry into military service in 1941. 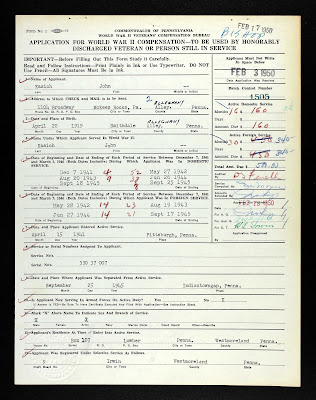 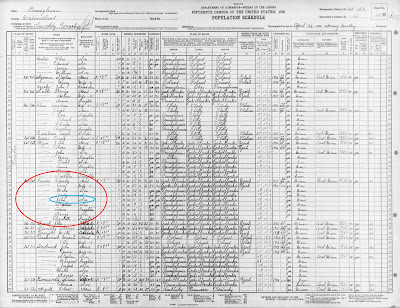 On this census form the country of origin of the parents is given as "CzechoSlovakia," and their mother tongue/native language is given as "Czech." Genealogists know how notoriously inaccurate the U.S. census has been when identifying these traits. Looking at the several other "Czech"-speaking individuals on this form, we don't see Czech-sounding names among them.

Below is the 1929 Petition for Naturalization for immigrants Vasil Kasics and his wife Jevka, residents of Lowber, Westmoreland County, Pa. (southeast of Pittsburgh). It shows that they had a son, John, born on April 20, 1919 in Pittsburgh. (This is inconsistent with other documents that give Smithdale as his birthplace.) 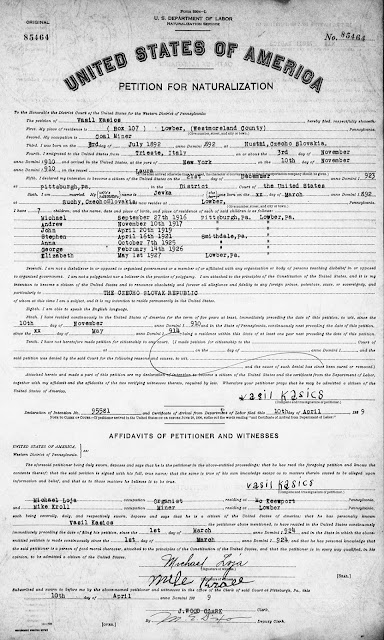 The baptism was performed by the Reverend Valentine Gorzo, longtime pastor of St. Nicholas Church. In the annotations column, it notes John's 1948 marriage to Anne B. Vukovich in St. Nicholas (Croatian) Roman Catholic Church on the North Side of Pittsburgh.

(Thanks to the Rev. Donald Voss, pastor of St. Nicholas Church, and parishioner Joseph Prokopchak for providing access to, and images of, this record, in January 2018.)

We found additional information on Vasil and Jevka. The following document is the record of their marriage license application in Westmoreland County, Pa.:

Vasil is named here as "Karol" (a Slavic form of Charles); presumably he was already using the name Charles in English, even though his naturalization document above refers to him as Vasil, his given name and the name under which he presumably entered the United States.

From this we consulted the records of St. Mary's Greek Catholic Church in Trauger (near Latrobe), Westmoreland County. The marriage register of the parish records the wedding as follows:

This a death certificate for Paul Kasics, son of Charles Kasics and Eva Lukan, born 1930 and died 1931 in Lowber, buried in West Newton Cemetery in West Newton, Pa., the main cemetery serving that area, including Smithdale and Lowber. 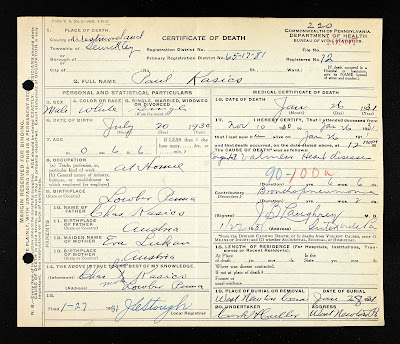 Jevka had a brother Andrew who came to the U.S. in 1907. On the ship manifest, his birthplace is given as Szuhapatak, Hungary (i.e., Suchŷj); his "Race or People" is given as Russniak (a term used at the time as the equivalent of Ruthenian, to refer to Carpatho-Rusyns and Ukrainians). 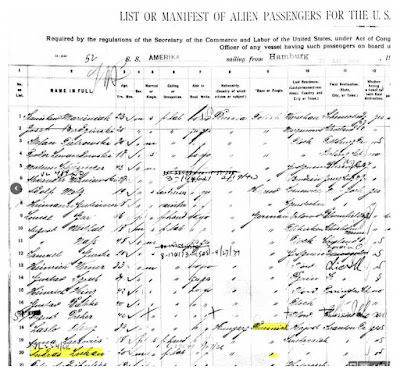 Andrew's 1970 obituary mentions his surviving sister, Mrs. Charles Kasich of West Newton. He was a member of the Greek Catholic Union of the U.S.A., the largest fraternal insurance society founded by Carpatho-Rusyns in the United States. 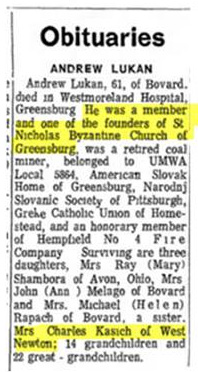 And the Greek Catholic Union's publication of deceased members in its Amerikansky Russky Viestnik/GCU Messenger newspaper from November 19, 1970 listing Andrew Lukan is below. He was a member of Lodge 502 of New Alexandria, Westmoreland County, Pa. His birthplace is given as "Ungvar" (the old Hungarian name for Užhorod), which was the administrative seat of Ung/Už County. This was probably a simplification found either on his membership application or made by whoever was compiling the deceased member listings. 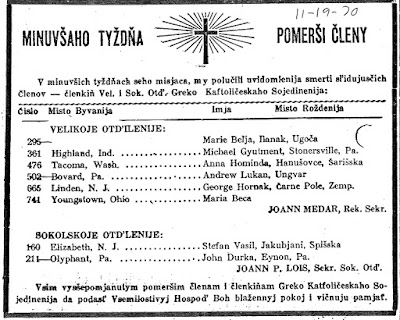 For the purposes of this blog, we are neutral on any presidential candidate's aspirations or qualifications. But we hope that this post sets the record straight about Governor Kasich's ethnic background and ancestry.

[REVISED 3/16/16 with additional information, including documents courtesy of Megan Smolenyak Smolenyak; many thanks to Megan for the contributions!]
[REVISED 3/18/18 with images of the baptismal record of Gov. Kasich's father John, from the register of St. Nicholas Byzantine/Greek Catholic Church of McKeesport, Pa.]
~~~~~~~~~~~~
Recent articles about Governor Kasich's childhood with some reference to his ethnic roots:

Original material is © by the author, Richard D. Custer; all rights reserved.
Posted by Rich C at 5:23 PM